Ketamine is an induction agent to induce general anaesthesia in the emergency department, associated with less frequent episodes of hypotension than other agents such as thiopentone or propofol. However, it is typically associated with increases in blood pressure in stable patients, and can cause hypotension in shocked patients.

In critically ill patients, avoiding hypotension is important, as it’s occurrence is known to be associated with poor outcomes, particularly in the head injured patient. However, hypertension is also associated with poorer outcomes, particularly in patients with intracranial bleeds (although cause and effect is not established) 6, and is usually avoided in haemorrhagic shock, due to consensus concern about increasing bleeding.

Co-administration of fentanyl during rapid sequence induction has been advocated as leading to less deviation from baseline haemodynamics.

It remains unclear whether in the emergency department and pre-hospital setting, this has any significant impact on mortality, and this exploratory study aims to evaluate whether patients undergoing RSI with ketamine and fentanyl, rather then ketamine and placebo have fewer episodes of adverse haemodynamic effects (systolic blood pressure less to 91 mmHg or greater than 149 mmHg) within the first 10 minutes following induction, and whether there is a subsequent difference in mortality at 3, 7 and 30 days.

The study will be powered to detect a difference in the percentage of patients who meet the primary endpoint of low or high blood pressure, and will be used to inform future work regarding difference in mortality benefit.

A randomised, double blind, placebo controlled trial evaluating the impact of fentanyl as an adjunct to ketamine and rocuronium on post-induction haemodynamics & 30 day mortality of patients undergoing rapid sequence of intubation in the emergency department. 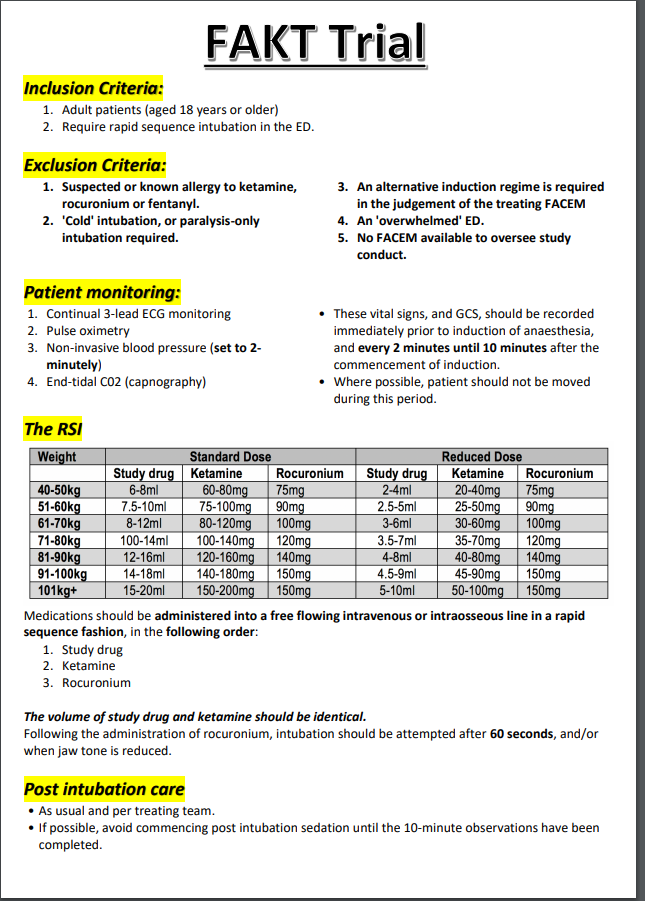